Adelaide has made six changes to its side which will face Brisbane at Adelaide Oval on Saturday night.

Ruckman Kieran Strachan has been named to play his first game of 2022 following a strong performance in the SANFL this season.

Key forward Darcy Fogarty returns to the side for the first time since the Showdown in Round Three alongside Jake Soligo who will play his third professional match.

Brodie Smith and Ned McHenry both come into the 22 following a week off due to concussion.

James Rowe has been named on the half-forward flank after serving as the medical substitute against Carlton in Round Eight.

Lachlan Murphy will miss Round Nine due to neck soreness.

Crows Head of Football Adam Kelly said the high number of changes was a combination of form and availability.

“Brodie Smith and Ned McHenry return from concussion whilst Lachie Murphy misses due to soreness in his neck that he experienced against Carlton which he hasn’t completely recovered from,” Kelly said.

“The balance of changes are recognition for players who have been playing their role at SANFL level and an acknowledgement that those going out of the AFL team haven’t been consistently performing at their best.”

Regarding O’Brien’s omission, Kelly said the ruckman “hasn’t had the rhythm of consistent performances”.

“Reilly has had games this year where his impact has been significant, the Western Bulldogs game was a strong example of this, however, he hasn’t had the rhythm of consistent performances that we have become accustomed to over the past few seasons,” Kelly said.

“There is little doubt in Reilly’s capacity to recapture the type of form which has earned him such high regard amongst our group and he has provided further evidence of his leadership capability in the handling of his omission, which sets a great example of what it means to prioritise others.

“Kieran Strachan has been in consistently good form in the SANFL, playing his role week in, week out, and he performed strongly in the closing two rounds of the 2021 AFL season.

“He has really earned this opportunity.”

Tariek Newchurch, Nick Murray, Patrick Parnell and Luke Pedlar have been named as the emergencies with one to be confirmed as the medical substitute one hour before the game.

Adelaide’s Round Nine team is: 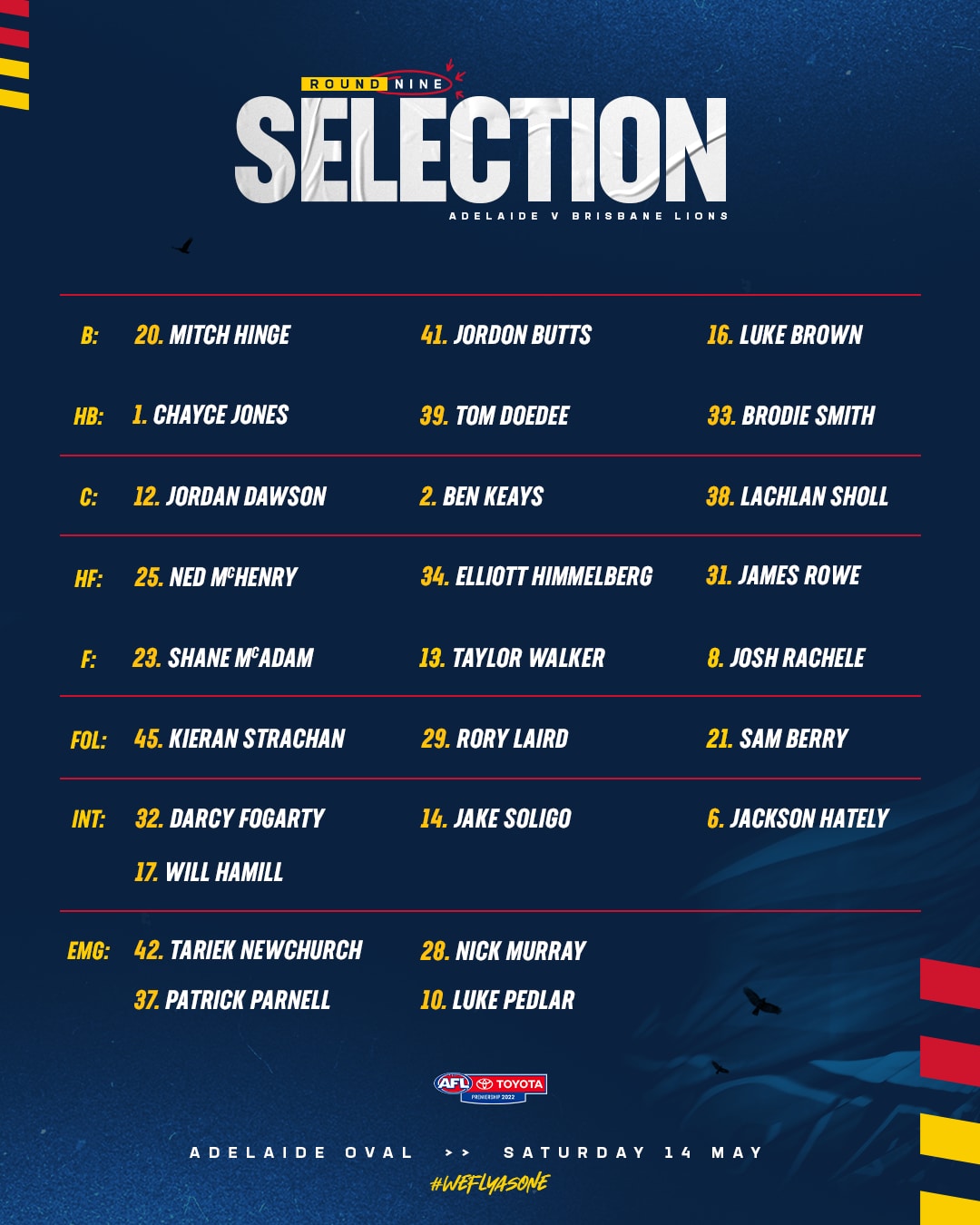 The remainder of the 2022 fixture has been released