Adelaide has been able to accommodate forward Mitch McGovern's wish to join Carlton with a trade officially finalised on Wednesday morning.

As part of a three-way deal, the Crows receive pick No. 13, a future fifth-round selection from Carlton and highly-rated Sturt forward Shane McAdam, who the Blues were able to claim as one of their mature-aged pre-draft access picks.

Carlton gains McGovern and a future third-round selection from Adelaide, while Sydney receives selections No. 26 and 28 from the Blues as well as No. 40 from the Crows.

McAdam, 23, is a medium-sized forward who impressed in his first season in the SANFL kicking 31 goals in 17 games this year. He is renowned for his forward line pressure and brings a combination of speed, agility and a strong overhead marking ability.

McAdam hails from Western Australia and equalled Eagle Nic Naitanui’s running vertical jump record at the 2015 Draft Combine, while also ranking first in the 20m sprint and second in the agility test. 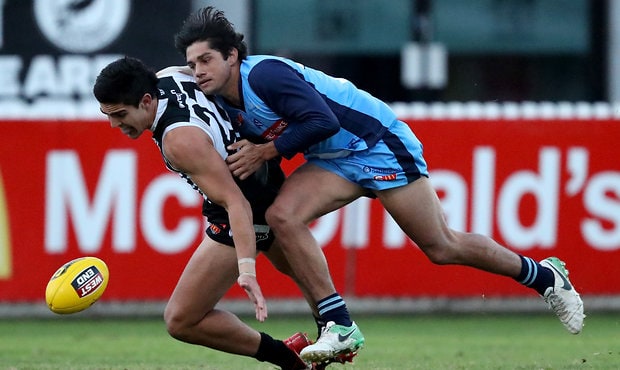 Crows General Manager List Management and Strategy Justin Reid said the Club was rapt to bring in another first round draft selection, while also bolstering its already talented forward line.

Importantly, Adelaide is now well positioned heading into the national draft and currently holds picks 8, 13, 16, 21, 72 and 82.

“The top-end talent in this year’s draft is considered to be the best in a long time so to bring in pick 13, as well as a player like Shane McAdam who we and many others in the industry rate very highly, is a great result,” Reid said.

“We believe Shane can have a real impact at AFL level and he complements what our other forwards already offer, and we head to the draft confident of bringing in some more elite young talent.”

McGovern played four seasons at Adelaide after being taken at selection 43 in the 2014 national draft and departs having played 48 games and kicking 67 career goals.

“We appreciate the contribution Mitch has made to our Club and wish him all the best for the years ahead, both on and off the field,” Reid said.

BCD: Wedding bells are in the air